The Irrational Attract of Mud Tires

My truck needs tires. The Ram’s Continental ContiTrac SUV tires are starting to resemble Hoosier race slicks around the shoulders and their weather-beaten sidewalls look like they’ve seen more UV light than Tan Mom. So I’m in-market, as they say, for new rubber. And I like the ContiTracs. They’re quiet, deliver a nice ride and summon respectable dry-pavement traction in those moments when I’m heading down an on-ramp and temporarily forget that I’m driving a 19-year-old 4×4 pickup truck—not too much howling at the limit from those Continentals, I tell ya. Replacing them with an identical set, or some similar pavement-biased all-season tire, would be the smart move. And yet: I’ll probably get some big dumb mud tires. 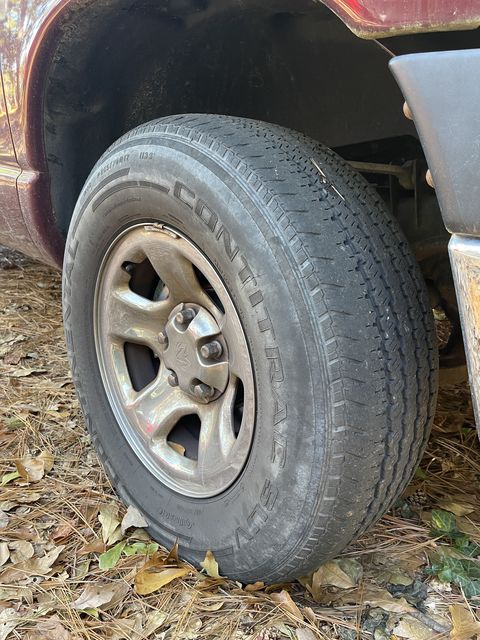 Mud tires, like the Goodyear Wrangler Duratracs that I recently experienced on a 2023 Chevrolet Silverado Trail Boss, are completely asinine for 99.999 percent of the situations you’re likely to encounter. Their huge tread lugs are lonely mountains, separated from their neighbors by yawning zigzag valleys of wide-open space. Because of all that area where the rubber doesn’t meet the road, these types of tires tend to perform poorly when it comes to skidpad and braking tests. They’ll struggle to put down the power, too, especially in the rain. Mud tires howl and moan on the highway. They’re not ideal in snow, since they’re designed to fling debris from the tread (the opposite of winter tires, which hold snow in the tread channels to encourage snow-to-snow friction). And they’re not even particularly great in every off-road situation—if you’re running the rocks at Moab, you won’t likely encounter a whole lot of sodden soil.

But you know where mud tires work great? Two places: in mud, and in your driveway. Because gnarly mud tires may only be necessary a tiny percentage of the time, but they look cool as hell 100 percent of the time. Every time you walk up to your truck, it tells you that you’re ready for an adventure. Sure, maybe you’re just heading to the dentist for your six-month checkup. But when you walk out of the dentist with your little plastic bag with a new toothbrush and a reminder card for the next checkup, your truck says, “Maybe you won’t make that appointment. Because six months from now we might be driving through the jungle in Central America. With tires like this, you never know.” Mud tires, like Mariana Trench-spec water-resistant watches, and bear-proof coolers, and preposterously specific kitchen equipment, are all about projecting possibility. You might have an off-road adventure. You might learn to scuba dive deep water. You might become the hit of the neighborhood with your awesome fondue. It’s like how people can derive pleasure from merely thinking about winning the lottery. Possibility is its own reward.

And I’m shallow enough to buy into that. What kind of tires did I have on my old diesel Bronco? Goodyear Wrangler Duratracs. Of course, howling tread wasn’t a huge concern there, given the attendant 7.3 Powerstroke thunder and hurricane-headwall wind noise. You can’t ruin driving manners when there’s nothing to ruin. The Ram, though, is almost refined. It’s quiet, and smooth, and has cruise control. You can drive 80 mph on the highway and feel like you’re in a reasonably modern vehicle. I want the truck to look cool, but I also don’t want to sacrifice any of that. When I broached this dilemma to my friend Keith, whose shop built the Bronco (and who sold me the Duratracs), he opined that I should get fiberglass widebody pre-runner bodywork, long-arm suspension and maybe a supercharger. I told him I love the fact that this truck has remained absolutely stock for almost two decades and it would be a shame to desecrate it, to which he replied, “Are you getting old?” 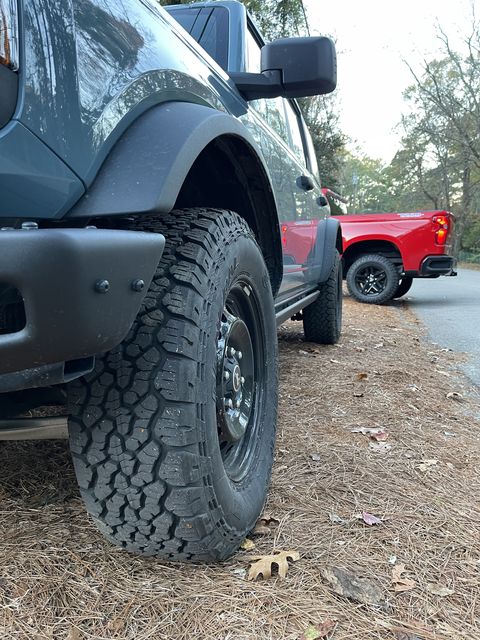 Maybe. But like Oscar Wilde said, wisdom comes with winters. And the last time it snowed around here, I saw trucks with macho tires sliding off the road. Plus one of my friends just replaced the all-terrain tires on his 2008 Tundra with some humble street tires, and he says it’s like he bought a new truck. “I was driving on the highway with my kids and I said, ‘Hey, do you hear that?’” he said. “It’s the sound of nothing.’” As opposed to the sound of worn tread blocks squirming their tortured song for mile after mile.

What I need, really, is tires that look tough but are actually sensible. Tires like the Bridgestone Dueler A/T Revos that I recently experienced on a 2023 Jeep Gladiator Overland with the all-terrain tire option. Like the Duratracs, they have tread crawling down the sidewall. Unlike the Goodyears, though, the Duelers present a contact patch more suited for I-95 than Florida bounty holes. They were civil. I’m sure that if I got them for the Ram, they’d be fine. They’re a reasonable compromise.

But do I have to be reasonable? Must I follow the path wherever logic leads? I have life insurance. I eat salads. My living room TV isn’t preposterously enormous. I only commissioned a Cameo from Tan Mom that one time. I am a pragmatic consumer, or else I’d be eyeing that whole dang Trail Boss instead of just its tires—its noisy, ridiculous, totally righteous tires. Yeah, I know, I never really drive in the mud. But there’s always the possibility.